Here are the top ten posts on Core News that were published in April 2014.
Another month dominated by the Essential Mix.

Enjoy Core News? Consider purchasing a premium account over at Uploaded.net or Oboom.com to get super fast speeds and support Core News at the same time!

The festival that focus on bass music takes place 3th to 7th of September 2014 in Pula, Croatia. I’m really considering going myself since so many artists are right up in my alley, if I have some vacation time left that late in the summer.

In the promo video below it looks like the festival is a blast. 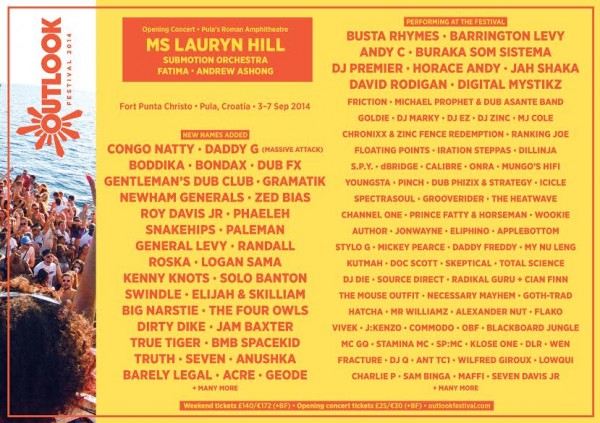 Here are the top ten posts on Core News that were published in March 2014.
For once it is not an Essential Mix that tops the list, but the awesome Detroit Special from Benji B! If you like the shows from Benji B and Gilles Peterson you should definitely check out Rob da Banks show where he plays new “left field” electronic music and tad of indie and hip hop.

Enjoy Core News? Consider purchasing a premium account over at Uploaded.net to get super fast speeds and support Core News at the same time.

It is time to have a look at which posts that were most popular on Core News in 2013. The top 26 list is totally dominated by Essential Mixes, as you might expect. Some of these mixes are really great and I gotta say that 2013 has been a good year for electronic music.

Due to my 3 month hiatus from the site some mixes probably are missing and the list is a bit skewed after Core News lost quite a few readers from this break, so my wish to all Core News readers is to spread the site and posts that you enjoy around the interwebs to keep Core News growing again. Thanks 🙂

PS: This might be a good opportunity to get yourself a Christmas gift by buying a premium account over at Uploaded.net to enjoy full download speeds and no annoying waiting times. Here are other options to support Core News.

Here are the top ten posts on Core News that were published in November 2013.
It is nice to see Benji topping the list! What was your favorite mix/radio show this month? One of my faves this month comes from Machinedrum that played a set on Polish Radio Czworka.

Here are the top ten posts on Core News that were published in October 2013.
Nothing really surprising in this list. What was your favorite mix/radio show this month?

On a side note, we have been getting a few complaints about the file host that Core News is using. Read about solutions here, but keep in mind that we are always looking for good alternatives.

First of, thanks for all the great support and feedback!

Even though I was gutted when Filesonic blew up, it has been weird for me to not be posting on Core News since the break, and I have to admit that lately I have been missing the blog.
So now I have decided to do a bit of posting, but in a smaller scale that are not so time consuming, and focus more on the music that I enjoy.

Right now I’m trying out Depositfiles as file host. It is not an ideal solution, and I might change if I find a better host. And who knows how long the hosts last these days…

Update: See this post for the latest news – https://corenews.me/status-for-core-news-take-two/

As you may have noticed Filesonic suspended downloading of files this weekend. This is probably due to Megaupload being destroyed by FBI.
Many other file hosts have fully or partially closed their services, and this will probably change the internet as we know and love.

Let us hope MPAA, RIAA, and all the other backward power houses in Hollywood (and worldwide) will go out of business soon. Their business models are ancient and they need to get up to date with the technology, instead of trying to cripple the internet.

For now Core News will take a break and observe what will happen next. Thanks for understanding and keep on loving good music.

Here are the top ten posts on Core News that were published in December, 2011. Lots of good stuff, but nothing really surprising. What was your favorite mix/radio show this month?

Here are the top ten posts on Core News in November, 2011. It is amazing that the Swedish House Mafia Essential Mix is still so popular. What was your favorite mix in November?

Time for the Weekly Roundup on Core News. This has definitely been a week for Photek with a great Fact Mix from him where he plays music that has inspired him and this weeks Benji B show with two hours of Photek. What was your fave show this week?

Here is a list of all the posts on Core News in week 9:

It has been a busy week for Core News with problems with previous file host and moving to a new one. Fortunately there has been a lot of good music this week to make up for the trouble. A few highlights for me is the Carl Craig Essential Mix and the 6 Mix from Jamie XX. What was your fave show this week?

Here is a list of all the posts in week 8:

Here is a list of the 20 most popular posts on Core News in 2010. As you can see the list is dominated by Essential Mixes from BBC Radio 1 and there is actually a few posts from 2009 that got a lot of views this year. What was your favorite post on Core News in 2010?

I’m on vacation in Northern Norway with very limited access to the net. For the next week there will most likely be no or very few posts on Core News. Meanwhile you can check the archives for great music that you might have missed. Core News will soon be back with all the regular shows.