“London’s infamous Boiler Room has rapidly established itself as one of the musical highlights of the London work-week. The project started out broadcasting DIY home footage of a small group of DJs jamming in a humid boiler room (go figure) contained in a secret warehouse. As weeks went by, the homespun TV channel found itself relocating to a much larger space and hosting bigger and bigger names for each session, as well as building a passionate fanbase of punters willing to queue for hours to attend the intimate recording sessions. With regular DJs on rotation that include Theo Parrish, Bullion, SBTRKT, Loefah, Oneman, Hessle Audio, and many more, it was high time that we began documenting these oft-discussed music sharing sessions. Usually the Boiler Room is synonymous with Tuesdays. But this one-off Monday night episode at Corsica Studios was a Valentine special, hosted by the almighty Young Turks posse, home to Mercury Prize winners The xx, amongst others. Listen here to Jamie xx and Yasmin throw down the classics back to back. Photo: Ashes57” 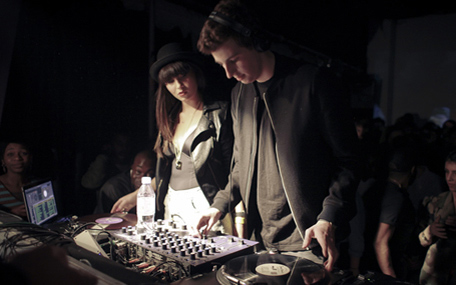