“Listening to Jacques Greene’s music, you get the feeling that we won’t have much longer with the artist in his current state. The achingly beautiful melodies, steamy synths, and chrome plated production that has so far attracted the attention of people like Radiohead, Azealia Banks, Katy B, and the XX is destined for major exposure. It is most likely the producer’s penchant for r&b that has got him to this point; his tracks typically play with saccharine vocals and heat-warped, shimmering keys that wouldn’t be out of place on a commercial pop track. Greene, however, keeps his sound firmly rooted in the club, drawing influence from, among other places, the most forward thinking UK dance music over the last 15 years. It is a sound that quickly won favor in those territories, his first two releases coming out on the London-based Night Slugs and Glaswegian LuckyMe labels. Anyone who has seen Greene perform live can also attest to the fact that the producer can strip away the gloss and meter out some punishing sounds, also evidenced on his Ready EP for Martyn’s 3024 label. LWE popped some questions to the Canadian in a bid to discover what it is that drives his music [his answers are coming soon] and also asked him to assemble our 198th exclusive podcast. With a raft of exclusives and unreleased material, Jacques Greene turns it out over 70 minutes for your listening pleasure.” 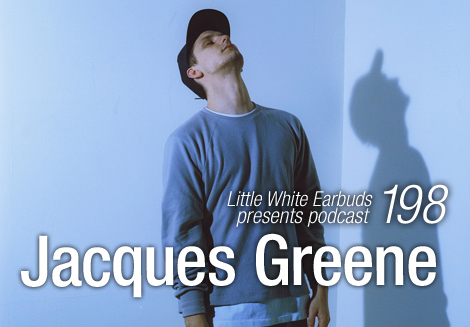