“Techno not techno.
Through the contours of this week’s RA podcast, it’s just about possible to chart the sound of Lakker, an Irish duo—Dara Smith and Ian McDonnell—who are known for producing techno that’s often tough to describe as such. The inclusions of Aphex Twin, Squarepusher and Autechre point to IDM’s influence on their music, a thread that runs through their fantastic recent album Tundra—at times the record shared a similar capacity for sophistication and beauty as those seminal artists. The likes of A Made Up Sound, Joe and Damu show how Smith and McDonnell are attuned to post-dubstep and UK bass. There was a bounce to tracks like “ED” on Blueprint and “Valentina Lane” on Stroboscopic Artefacts that could have placed them in that canon, but really there are little quirks like this all over Lakker’s sound. Then there are cuts here by leftfield house acts such as Afrikan Sciences, Gesloten Cirkel and Heatsick, artists with whom Lakker share a freewheeling compositional approach. Through the appearances of J Dilla and Stones Throw Records we learn that hip-hop plays a role in their style. In fact, the only thing we don’t get much of in the mix is straight-up techno: Smith and McDonnell are by now very much embedded and respected within the scene, but this shows their complex and singular relationship with the sound.
On RA.472 Lakker tie all of these stylistic threads together with a neat trick. Almost all of the music is short loops—beats, melodies, textures—blended into one hour-long piece. If that sounds a little stuffy, well, the results are anything but.” 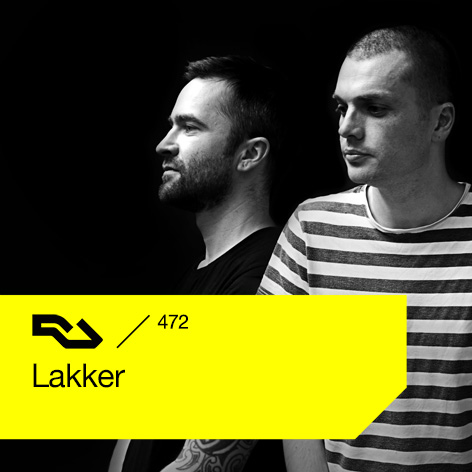