“Canadian DJ and graphic novelist Kid Koala takes to the 6 Mix decks for two hours of turntable trickery.
Born in Vancouver BC, Koala – known to his parents as Eric San – gained his nom de guerre whilst at university in Montreal, where his infamous mix tapes found their way into the hands of Ninja Tune who offered him a record deal.
Since his debut LP, 2000’s Carpal Tunnel Syndrome, he’s toured with DJ Shadow, Beastie Boys and Bjork, been a sometime member of cult hip hop collective Deltron 3030 and even published a series of graphic novels.
His new album, 12 Bit Blues, sees him fuse a variety of 1920s blues recordings with his scratching and sampling aesthetic, creating a unique sonic stew.
Tonight, Koala drops by the 6 Mix studios to talk about the genesis of the album, his love of sampling and shows off his infamous turntablism skills. ”
Check out other 6 Mixes in my archive and subscribe to the feed to get good music in the future. 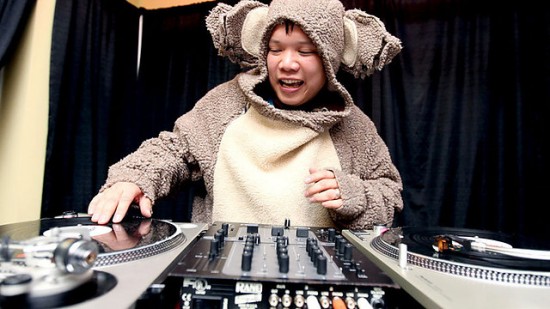